I’ve been deeply involved with the Apple developer community since the 1990s. There has always been conflict between developers and Apple. Over the balance of fixing bugs versus adding features to the platforms, over the quality of documentation, over the tools, over everything. But the relationship has clearly turned for the worse during the App Store era, and the reason, I think, is money.

This excellent paragraph misses one key thing in my opinion that nobody seems to be able to put into words and I am still struggling a little bit.

John Gruber’s excellent piece of the current sentiment in the developer community towards Apple and him circling around Phil Schiller’s E-Mail of what could have been, sent many years ago regarding App Store policies, are all spot on. I recommend reading the entire piece first if you haven’t yet before continuing to read my (poor) attempt at articulating my thoughts on the topic.
The quoted paragraph above is what lead me to write this blog post, and while I have disagreed with many of John’s opinions over the last two-ish years specifically, I believe that disagreeing is a good thing.

As much as this conflict is about money, it isn’t about money at all. It also isn’t about any of the stated friction points in particular. For example Xcode is the best and the worst development environment that I have used so far. It does so many delicate and complicated tasks in a very effortless feeling Apple-y fashion, but as much as it sometimes feels like magic it also fails in a very Apple-y fashion, and you know exactly what I mean by that.
I still get signing credentials for Guardian and my other apps manually because I was burnt so badly by the automatic tooling in the past that I am not yet willing to trust it again.

The biggest problem I personally have is the general indifference towards developers. The position that we better be grateful for the opportunities they have blessed us with or else…, is simply disappointing. To further break the problem down, there is only one correct answer in my opinion to the question “who needs who?” in this relationship and it’s “both need each other”, but Apple refuses to acknowledge that. Apple wouldn’t even sell half as many of their devices without software from third party developers that elevate the devices to become an essential turning point in people’s lives. The builtin software from Apple lays the foundation and sets the tone but the third party apps are what make the platform which sells the hardware. Remember the “There Is An App For That” marketing campaign? They sure as hell weren’t referring to their own apps, or are our apps really their apps? The refusal to acknowledge this symbiosis is why it then boils down to being about the money. If they took 2% + whatever the credit card processing fees cost them I bet many would be willing to accept the current terms and call it the “I hope you choke on it” tax.

This is correct but overly simplified, which was the correct tradeoff by John to not get lost in a tangent in his post. Developers aren’t third and users aren’t second.
Apple is first, Apple is second, Apple is third, Apple is fourth and Apple is fifth. Users might be sixth depending on which day of the week it is and developers aren’t even in the top 20.
It has a lot of Chappelle’s Show energy.

Cook said that lawsuits were in the back of his head, but what triggered the program was worry over small businesses during Covid.

I believe the problem that many run into recently, as do I, is that the words spoken by Apple’s leadership in interviews or keynotes in the past could generally be trusted and taken at face value. I do believe that they actually care about the user’s privacy, and try their best as they run into political limitations around the world. The blatant lies in broad daylight though, both under oath in court as well as in a few recent interviews touching on these and similar topics is reputational damage that will last a generation.

Just as a brief reminder, in the beginning of 2020 as everybody was running around losing their minds while trying to adjust to huge shifts of how they were going to live their lives, Apple decided that it was a good time to force as many apps as possible into adopting the in-app purchase system, which would ensure that they get their 30% cut from many things being forced to shift to online transactions pratically over night. Many people were unsure if and how they would be able to feed their families and while they tried to improvise as much as possible, as we all did, Apple either held app updates hostage over in-app purchase adoptions or threatened with removal from the App Store. Every other day a new story was shared by a new developer, big and small. I am convinced that Apple’s leadership team was well aware of what was going on at the time and had every chance to stop it, but they chose not to.

Here is the full quote, quoting the exchange:

Rogers also expressed doubt that Apple’s Small Business Program, which cut App Store fees in half for small developers, was made out of concern for small businesses during the Covid pandemic, as Cook testified on Friday. “That seemed to be the result of the pressure accrued because of investigations, of lawsuits,” Rogers said.

Cook said that lawsuits were in the back of his head, but what triggered the program was worry over small businesses during Covid.

Rogers remarked that she had seen a survey that 39% of Apple developers are dissatisfied with the App Store. “It doesn’t seem to me that you feel any pressure or competition to actually change the manner in which you act to address the concerns of developers,” Rogers said.

Cook disagreed and said that Apple “turns the place upside down for developers.”

Even their attempt to provide them with the smallest bit of saving grace due to legal pressure completely failed thanks to it being so complicated for no obvious reason that apparently even Apple struggles to work with it based on this thread started yesterday by Russell Ivanovic.
Whether or not it is complicated due to them being greedy or due to another reason, it is not a good look and has not helped them in any way in my opinion. Not with developers and not to alleviate legal pressures. It failed so transparently that they were directly called out about it during the court hearing, not by the opposing legal team, but rather by the judge. 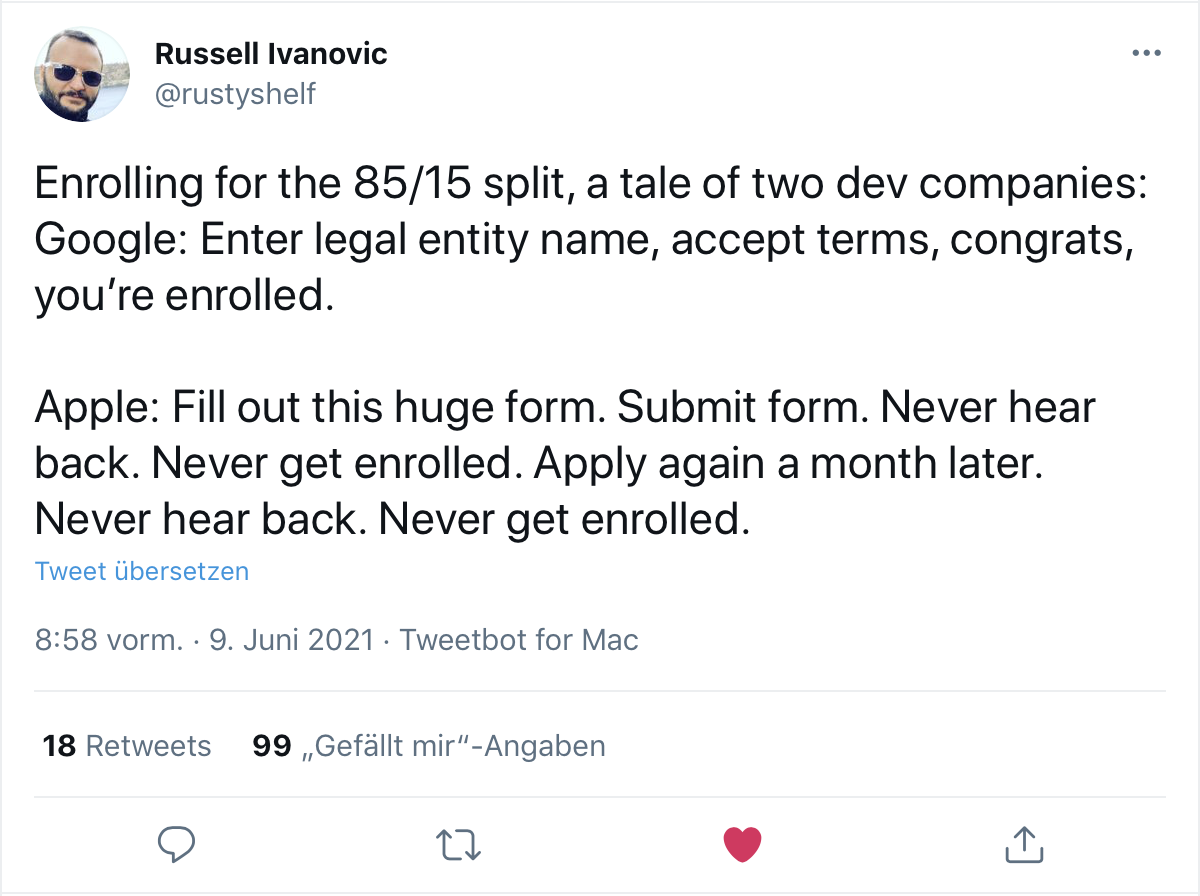 From the replies in the thread it appears as if many run into this problem, as they have no idea whether or not they are actually enrolled (some simply never get enrolled it seems). Many small developers which already don’t have the time to deal with this sort of nonsense, now have to spend their time trying to read the tea leaves to understand whether or not the first, second, third or fourth time they applied to enroll actually got them into the program. 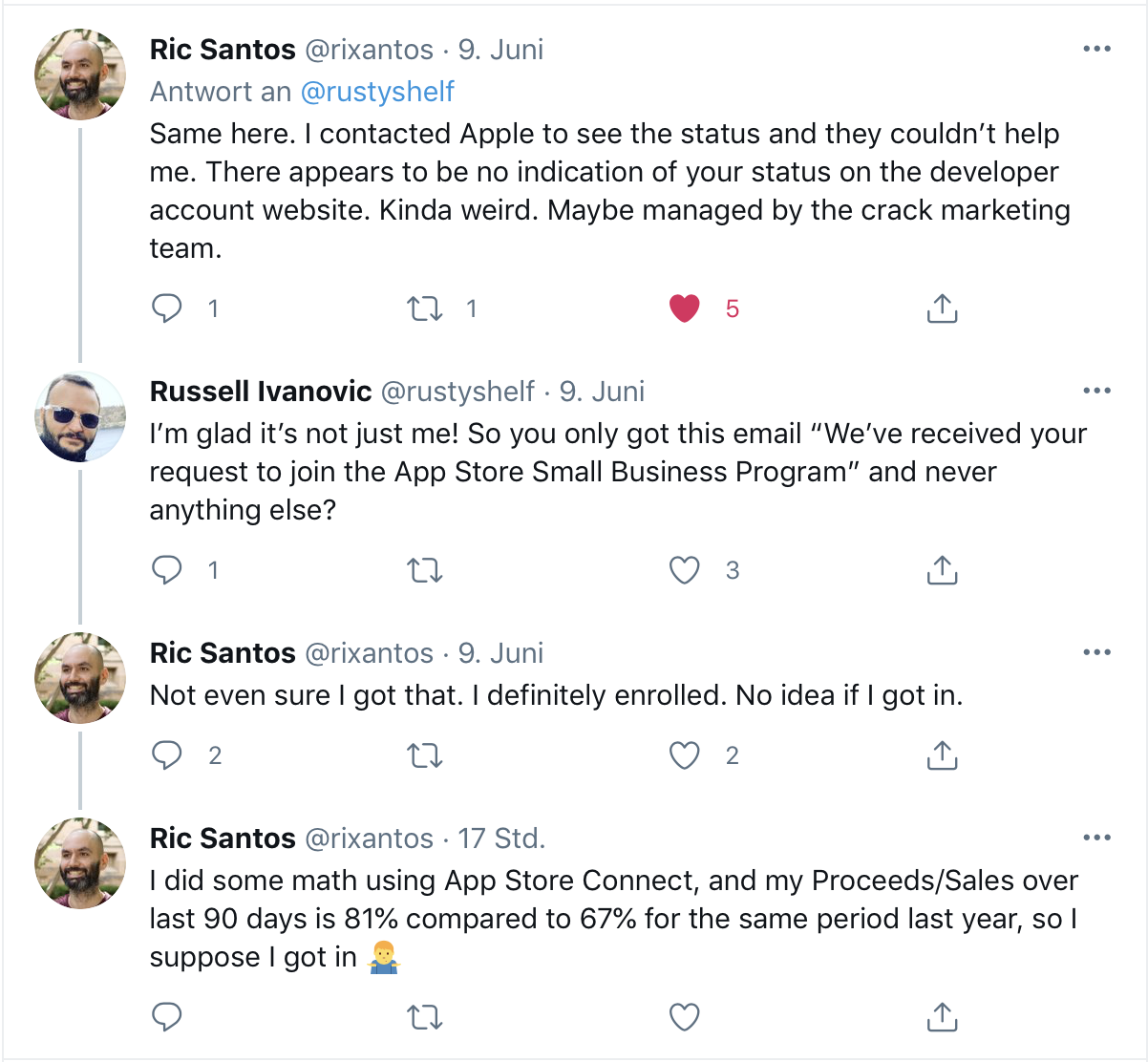 How many more devices could Apple sell if they were to allow developers to provide the best possible experience to their customers on their platforms. By simply making it nice in every way and have not just their, but also the software written by third party developers solve all of your problems effortlessly and get out of your way. Remember back in the iOS 5 days when developers and designers on Dribbble were trying to trump each others login screens with the coolest looking, best working login screen possible on iOS? I want that but for every problem on the platform from payments to logins to modal alerts to interface idioms. Image what would be possible with some constraints lifted like Phil Schiller tried to express in his E-Mail while guaranteeing all the security upsides that currently exist for users.