When the announcement of WWDC 2016 was intentionally or unintenionally revealed I knew that 2016 would be the year that I’d go into debt if I have to in order to fly to San Francisco.
Unfortunately though I was not amongst the chosen ones who were granted to hand Apple 1600$, but that didn’t stop my excitement the slightest bit. I was determined to squeeze into cattle class for 14 hours in order to fly to San Francisco. Right away I hit up the two and a half people I “knew” on Twitter hoping that someone would be willing to meetup. In order to make it out to Cupertino to Infinte Loop 1 and the Google Plex in Mountain View I had to arrive well before anyone else would since the actual WWDC week is very hectic all around. There are meetups and events happening around the clock, even if you don’t attend the actual conference put up by Apple.

I was set to arrive on the 8th and that trip turned into an absolute nightmare. My Boeing 747 had a faulty auxillery engine and after 2 hours of being actively sauna-ed, the flight was first canceled, then uncanceled and finally un-uncanceled but was forced to land in Chicago in order to swap out the crew and refuel. After doing all that I arrived 9 hours late and awake for 30 hours at SFO.
After all this trouble I had finally reached my goal. I was sleep deprived, sweaty and absolutely ready for a drink! 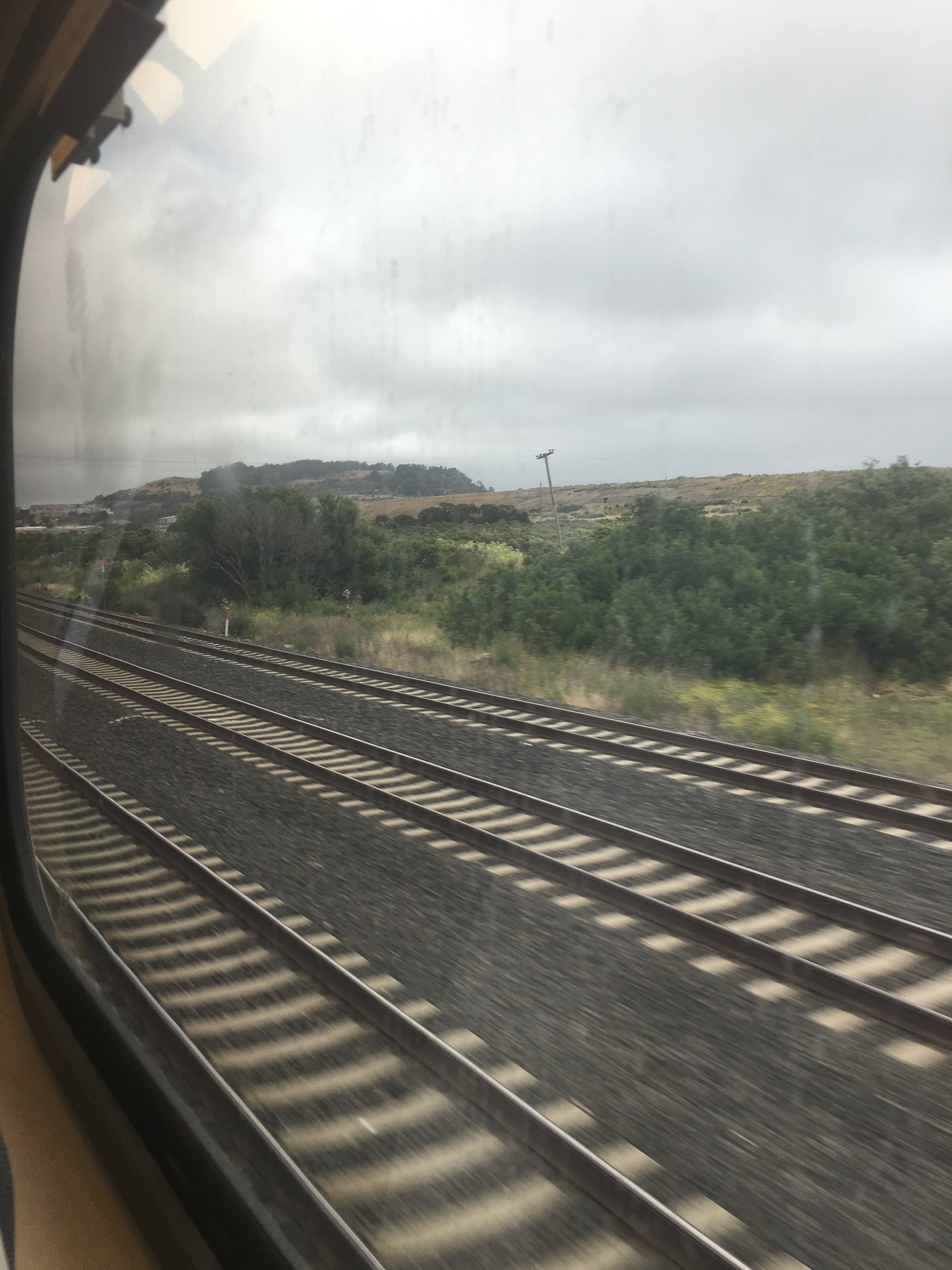 The next day I took the excellent Caltrain from downtown San Francisco to Sunnyvale in order to meet a friend who works at  and look at the old (Infinite Loop) and soon to be main (aka. the mothership) Apple campuses. It might be me fangirling hard but getting to see Apple HQ left a huge impression with me. There is a very special vibe about the place and there are Apple peeps running all over the place. Being there for the first time it’s almost magical. Due to the fact that I was able to convince someone at Apple to pose as my friend, I was allowed into Infinte Loop 1 itself past the very relaxed looking  Security guy (the uniforms look awesome) and into the Café Macs at Infinte Loop 1. I did not take any pictures in, around or near Infinite Loop 1. I guess this is mostly due to me being afraid, respectful of my very fortunate situation and well very afraid 😄. After all I wanted to return and see it a second, third or fourth time maybe. I was never told to not take any pictures of anything but I wanted to be as respectful as possible of this maybe once in a lifetime opportunity.
Before entering Café Macs I was told that “it is crazy in there around this time” and that “I will show you around first and you can then pick whatever you want. We then meet at the checkout again”. 😐 What could possibly go wrong? It was very intimidating at first looking at all these nerds run around. Once you got into the mix and queued up at one of the various counters the staff quickly prepared the meal you wanted. All (mostly) hand made right in front of you. I chose to have a Burrito having being told that they’re awersome, which btw. are were, and we then sat outside under a umbrella protecting us from the sun. I joked that “It’s just like back in high school” and got “oh it’s even worse” as a reply. Go figure haha.

My visit to the Apple headquarters ended with a tour peeking at the new mind blowing Apple Main Campus (videos) and a drop off at the Sunnyvale CalTrain station. The trip to Apple was amazing and I will for sure try to stop by next year and say hi to more awesome people I met throughout this week!

On the following day I essentially repeated everything but got of the Caltrain one station earlier this time around: in Mountain View. Upon getting closer and closer to Mountain View I all of a sudden spotted on of these on the road. 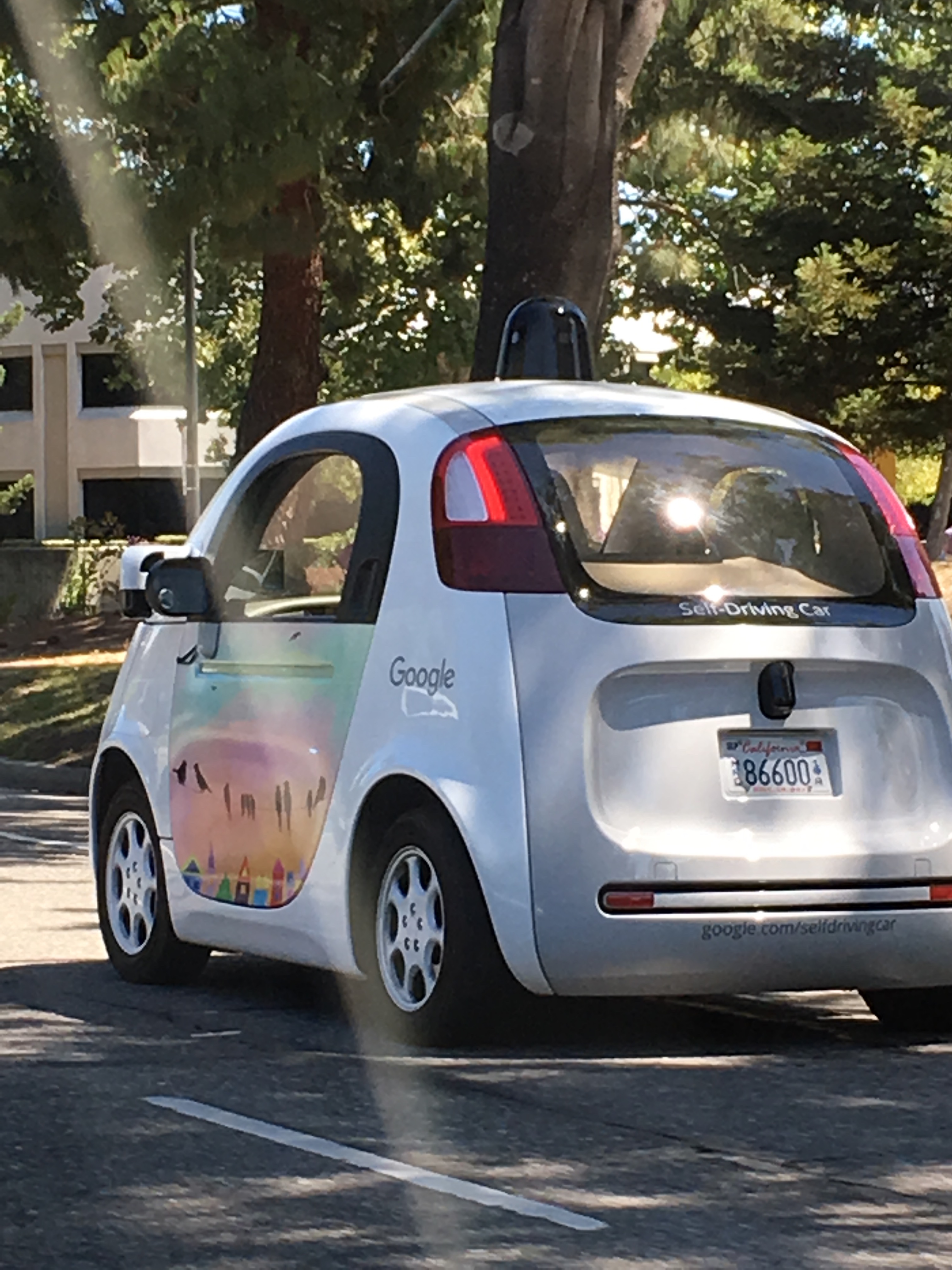 Google is a very very different experience. The drive into Mountain View’s part where Googles HQ is located, is very green with lots of big, old trees. The Google campus itself is incredibly colourful, with lots of thing things coloured in one of Googles 5 different shades. Maybe I picked a bad day but Apples main campus was empty of any standout foreigners compared to Google’s. Since I had to wait for roughly 10 to 15 minutes for my host I was able to observe the crowd checking in at the visitor center. In that time period I saw at least 50 people with all kinds of nationalities check in as guests greeted by big and small robots everywhere. Google is pretty geeky and they enjoy it. 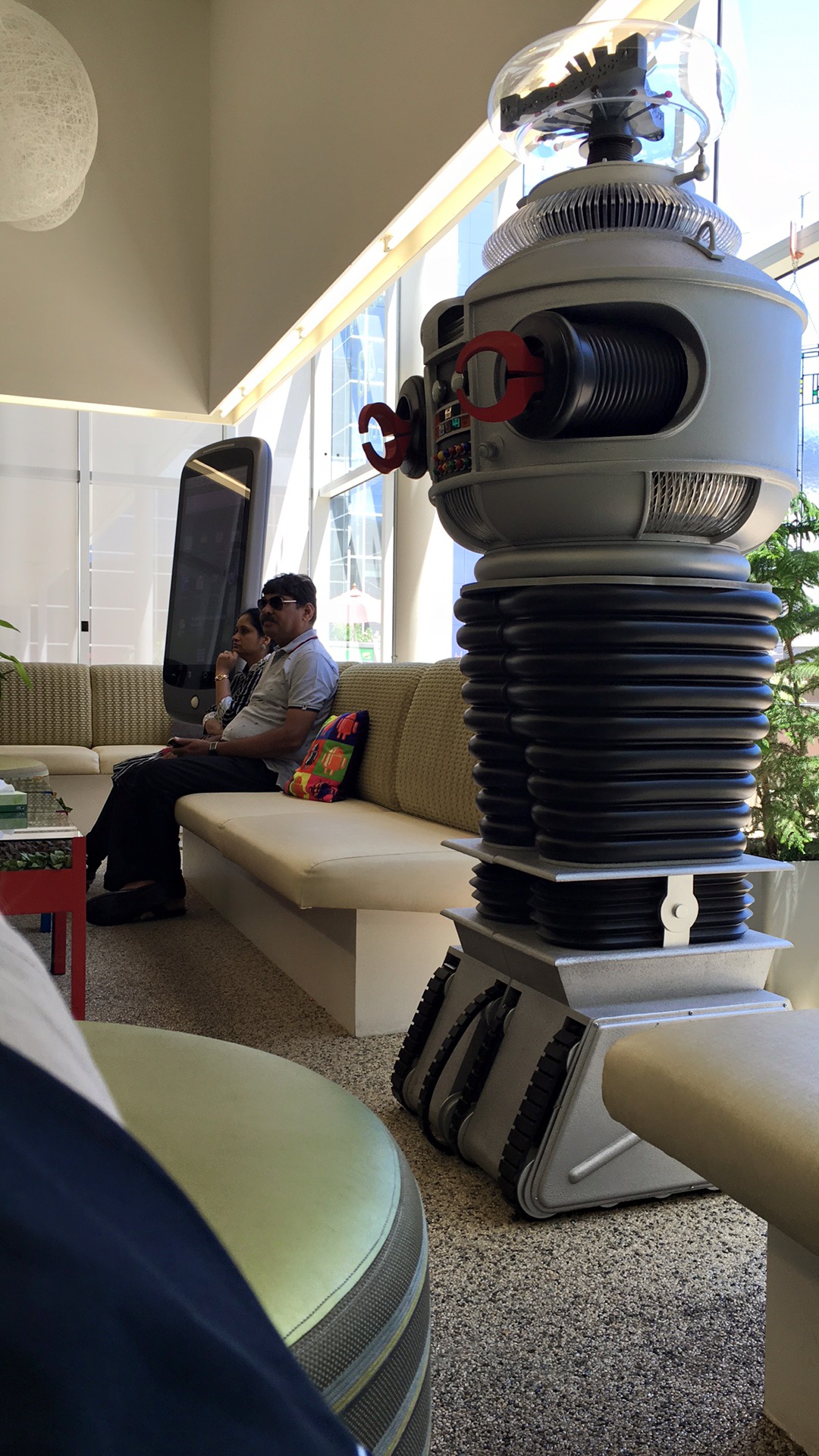 Once I met up with my host at Google we went for lunch at one of Googles many restaurants and here is one thing that absolutely blew my mind: The access to the restaurants themselves (at least the ones I saw) were only secured with single manual door activated by anyone with a contactless keycard. Once you were in there the food and the drinks were all free and nobody looks at you weird for just walking up and ordering a meal. There aren’t even price tags on any of the items on the menu and the registers physically couldn’t charge you, even if the cashier wanted to. There were no payment terminals or Square credit card readers. I should have taken a picture, but again I wanted to be respectful.

Friday evening and Saturday were a little uneventful and since I knew nobody yet I tried to use my time wisely on Saturday and went shopping 😬. That counts as using time wisely right? 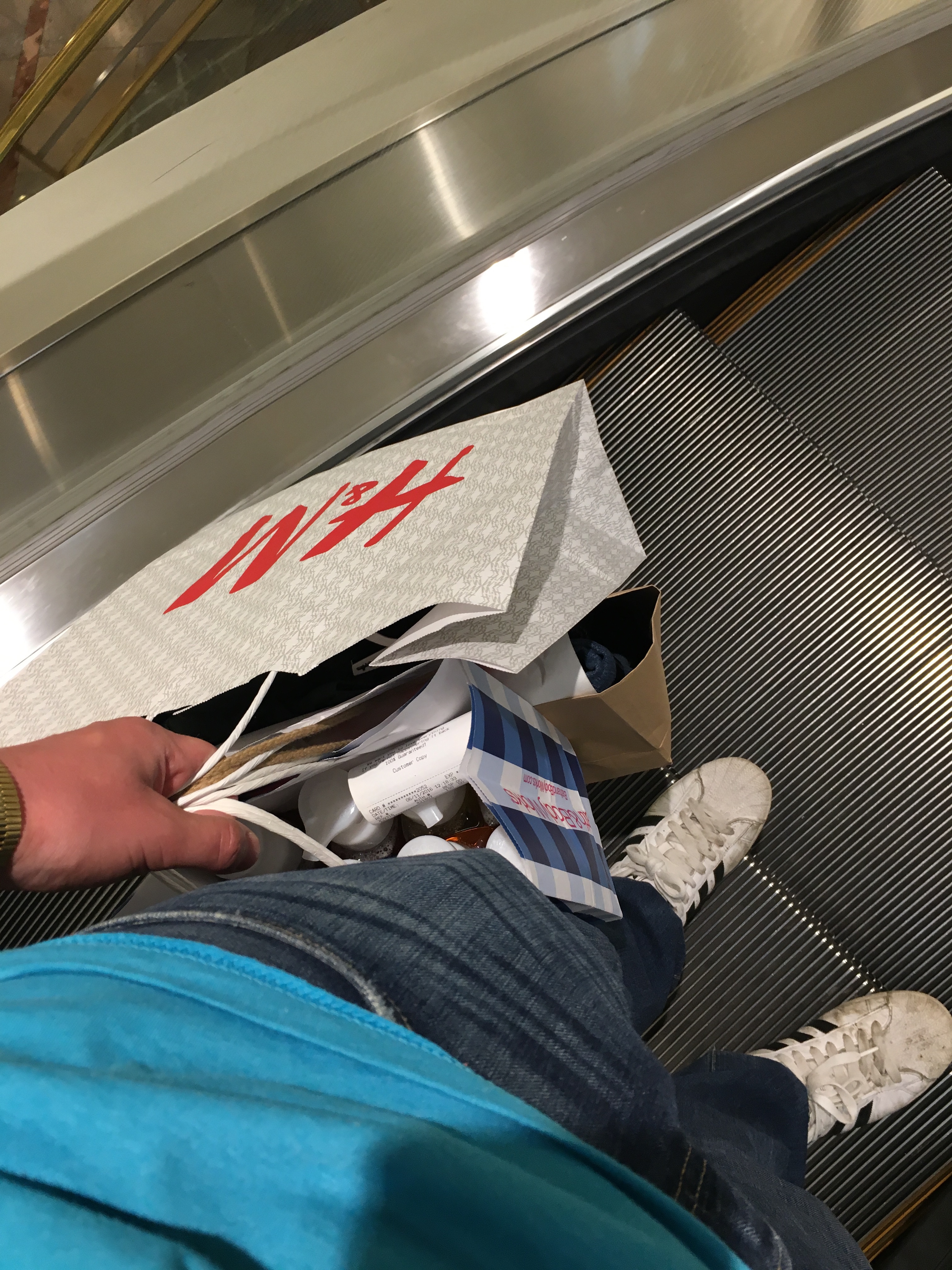 On Sunday however things started to take off, as I took part in the excellent 10 km WWDC hike. On that hike I met some awesome people and a little group formed. After splitting up in order to clean ourselves a little. We all met up at sfMacIndie again just across the street from the convention center. Yay sozializing nerds 😆

Monday through Friday were official conference days so the days were long, the alcohol consumption high and the events my new friends dragged me to were everything I hoped to experience and more.

In the mornings I went to AltConf at the AMC Metreon just across the street from Moscone West which had some very interesting talks, an awesome structure and experienced organizers. I was able to pick talks I was interested in and otherwise attend to other events or meet with people in random places around town.

The Beard Bash was a great start to the week with good vibes and good live music. Some of us started dancing right in front of the stage and one of us decided that shots were a thing we desperately needed. That night a toaster-oven in a high rise building in San Francisco may or may not have caught on fire. There may be images.

On Tuesday I attended The Talk Show Live From WWDC 2016 live recording with Phil Schiller and Craig Federighi as John Grubers secret guests. It was an incredibly entertaining show with good fun and great technical insight. It’s good to know that Vice Presidents at Apple are very much part of this community and don’t live their lives completly seperated in their little Apple bubble at Infinite Loop 1 behind all white gates.

James Dempsey and the Breakpoints were probably one of my favorite events of that week on Wednesday night. The event was basically a fundraiser for Appcamp for Girls but didn’t feel like it at all. The live music was nerdy but very fun featuring song titles like “Modelin' Man”, “The Accessibility Song” or “Model View Controller”. And there is no better way to close such an event than having everyone in the room sing “The Liki Song” together. An absolute must-go for next years WWDC, if such an event will happen again. 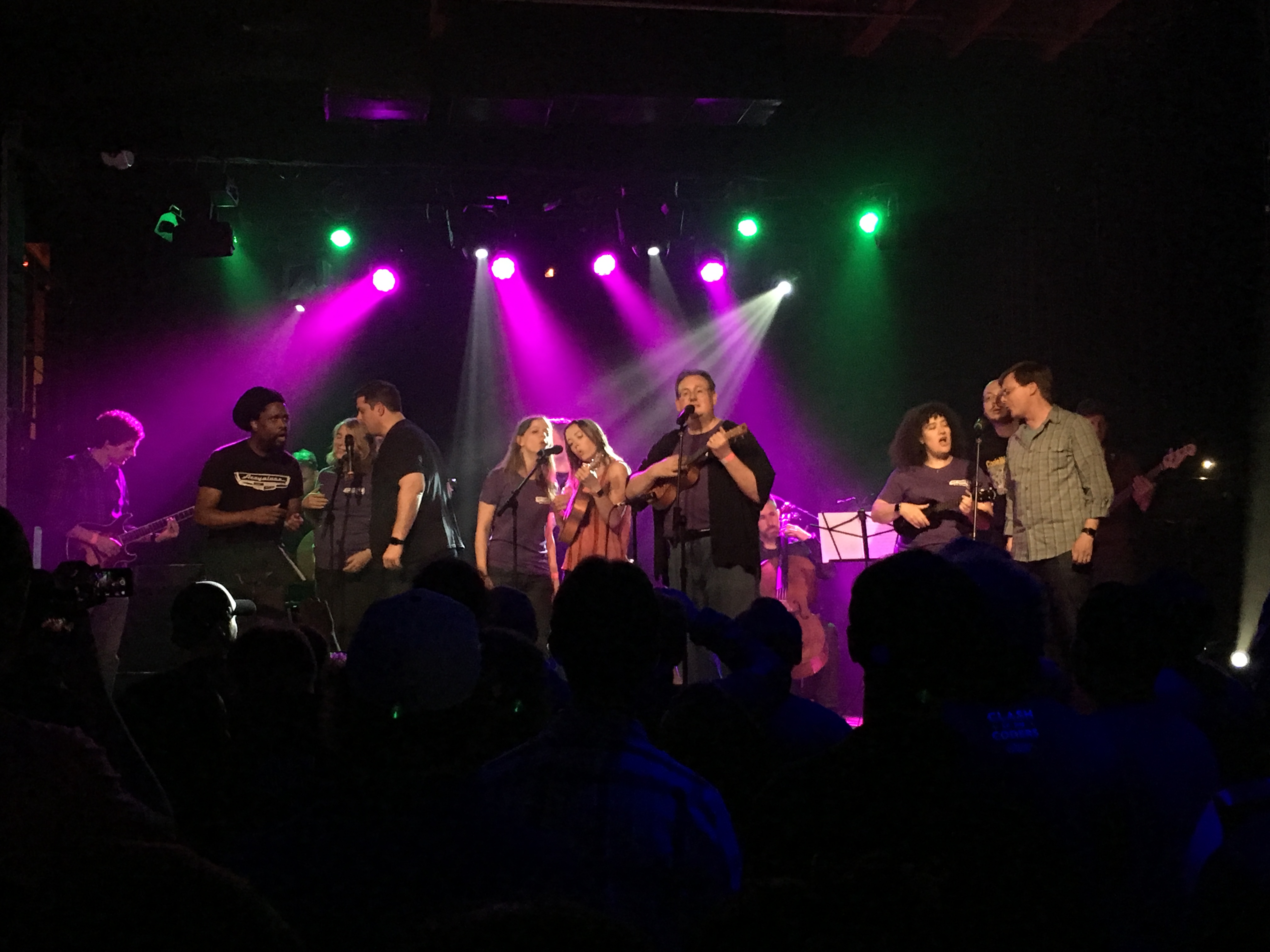 After Wednesday the events died out a little but that didn’t stop Realm from celebrating their 1.0 (cough well 1.0.1) launch on Thursday. I’ve never used Realm before but I’m very much looking forward to giving it a try. The peeps working on it seemed very motivated and happy with their product and I think they deserved to party a little. Realm is also very commited to the community and regularly host videos of conferences and help with the production of such (that was actually how I got introduced to them in the first place).

Friday was an incredibly slow day for me, which seems obvious in hindsight since the conference was winding down and a lot of people were leaving the city in order to get to their loved ones early but it felt very strange to me in ways I can’t articulate.

Saturday was my last actual day in the city and I spent it having an amazing breakfast at Brendas French Soul Food, at which one usually has to wait for at least 30 minutes to an hour to get a table, but we got lucky and were in and seated just minutes after everyone had arrived. 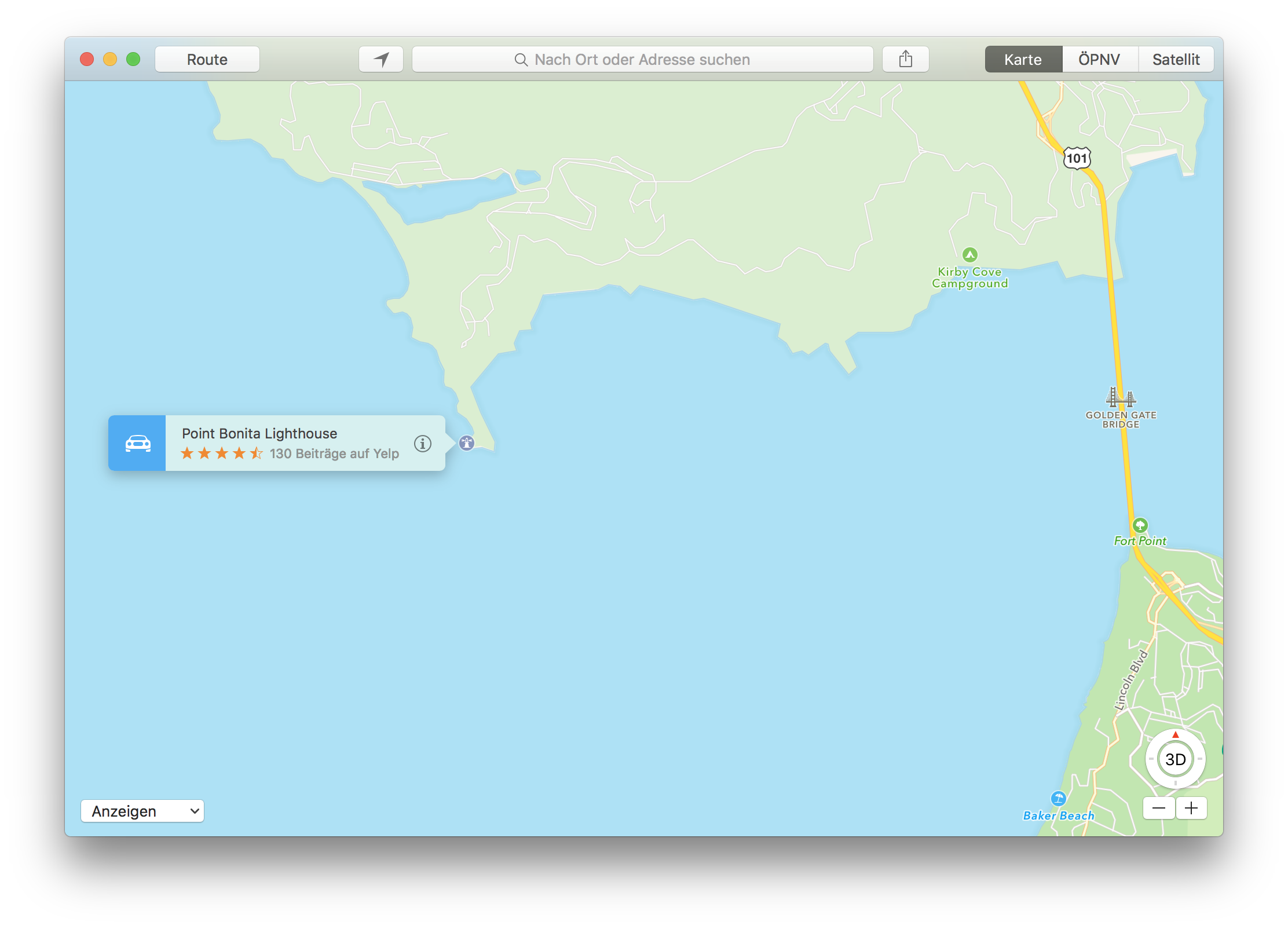 WOW! What an amazing spot to visit. We first intended to go to Big Sur that Saturday but after actually looking onto a map and noticing that Big Sur is 5 hours away on windy, twisty roads we quickly looked for alternatives and I’m very glad that we did. Point Bonita is a quick drive across the Golden Gate Bridge and up a little mountain road after taking the first exit on the north side of the bridge. The actual lighthouse was built ontop of a rock sticking out of the shore just about 15-20 meters away at the very end of an ever so narrowing little hill that descends into the ocean. 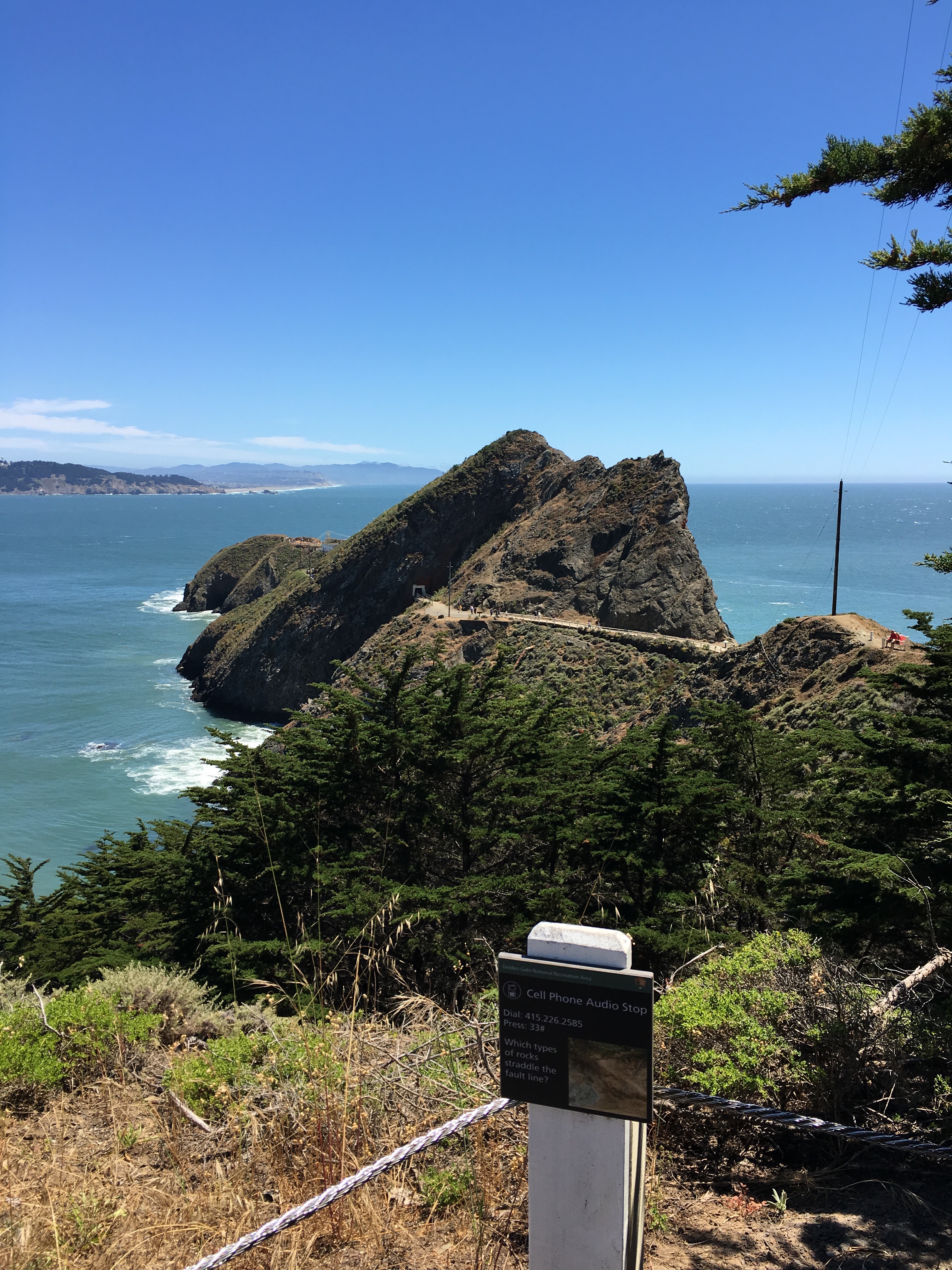 The lighthouse itself is only accessible by a heavily in the wind swinging, little bridge. If that were to scare you the alternative is to not go across the bridge and enjoy an almost equally good view onto San Francisco and the Golden Gate Bridge. Once crossed the drive out of the city and the walk from the car down the trail was worth it though! The view out onto the ocean was amazing and whilst chatting with volunteers I was told that every so often Humpback Whales can be spotted (I was able to spot a couple of Dolphins, but no huge whales that day). 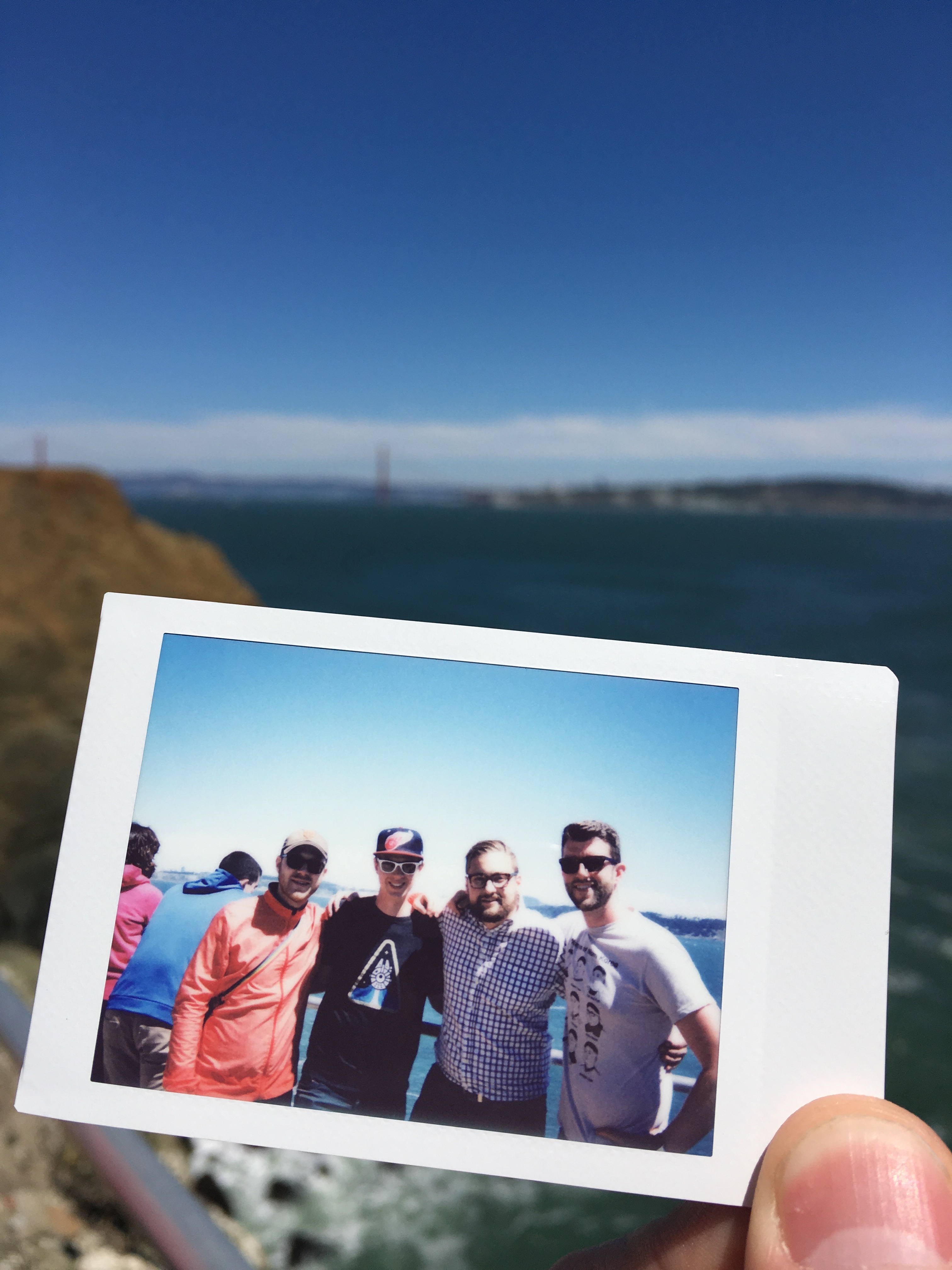 After walking back to our awesome Chrysler Mini Van we drove back to Route 101 and were on our way to Muir Woods National Monument. The trails through the huge Redwood forest had a huge impression on me since we don’t have those kinds of trees anywhere in Europe. Muir Woods was way more touristy than Point Bonita but just as beautiful. The trails were all very clean (which I had first questioned with the general waste attitude in America…) and respectfully setup of the forst. Dead trees were used a couple of times as little bridges across ditches instead of any artificial metal contraption. The park was educational, tasteful and had various different routes for different types of hikers. 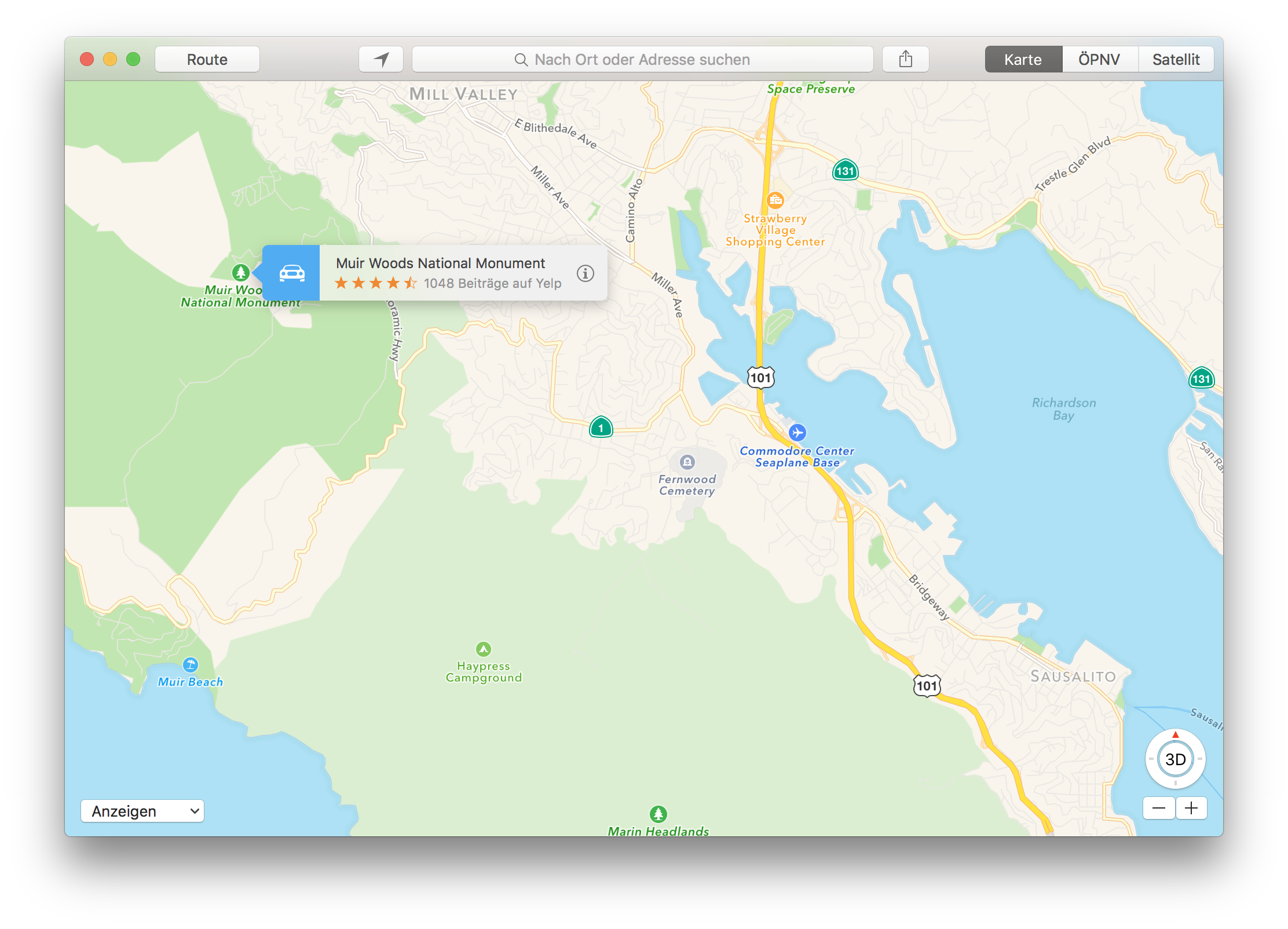